Changing your Idea of what Robots can do – This is the tagline of American Engineering and Robotics design company. Marc Raibert the german descendant founded the company in 1992.

The idea of robots are a things of the past the oldest dated robots or automatons was in 270 B.C byGreek Engineer Ctesibius.

The plot was simple and terrifying, the man makes a robot then robot kills a man.

We humans have always been curious by nature and we are also scared of what we don’t know. Almost every author for the past millennia has been warning us of our impending doom because of robots Asimov “I Robot” and world wide hit like “Terminator” to name a few. But now we already have a citizen Sophia who is humanoid robot  completely autonomous, which most people are skeptical about but here in Boston Dynamics they are not trying to build a robot for talking instead for various task we cannot do.

Spot: Takes a Kicking and Keeps on Ticking

After various models like ‘BigDog’, ‘Cheetah’ they have developed a quadruped robot that will help and assist us various terrain it can traverse both snow filled and rocky area with ease

Check out this TED talk.

Consider the applications of such robots for various purposes cave explorations to space exploration missions we know SpaceX is planning to colonise mars they have only explored less than 50% all terrain on mars and not all space vehicles can traverse these terrains consider the case of sending few of these in various directions, or sending them to see rigidity of ice caps or to check how active a volcano is.

These can run as fast as cheetah and as quiet as a cat also, and applications of them in military will be phenomenal they can be used as surveillance or as a bomb diffusion squad, they can be very useful in search and rescue missions.

Atlas: The World’s Most Dynamic Humanoid

Atlas is a humanoid robot from Boston Dynamics. Atlas’ control system coordinates motions of the arms, torso and legs to achieve whole-body mobile manipulation, greatly expanding its reach and workspace.  Atlas’ ability to balance while performing tasks allows it to work in a large volume while occupying only a small footprint.

The Atlas hardware takes advantage of 3D printing to save weight and space, resulting in a remarkable compact robot with high strength-to-weight ratio and a dramatically large workspace.  Stereo vision, range sensing and other sensors give Atlas the ability to manipulate objects in its environment and to travel on rough terrain. Atlas keeps its balance when jostled or pushed and can get up if it tips over.

Application of robot like Atlas is actually limitless it’s limbs can be independently controlled these were built for search and rescue missions, these can carry considerable amount of weight, and can traverse almost any terrains, most importantly they are self balancing just like spot  because of humanoid shape falling down is easy but it gets up just as easy.

These are just two that just stuck with me they are developing a ton more new cutting edge technology and we get a sneak peek at the future of robotics and neural network. They have much more to offer us, do check out their page.

I don’t have enough hubris to say that this is the only way towards future but I am optimistic that building these will bring us another step towards a better future.

I cannot lament at the idea robots will be our ultimate doom, but truly who knows the future all we can do is expect the best and prepare for the worst. As Arthur C Clarke put it “Any sufficiently advanced technology is indistinguishable from magic”.

Just look back 20 years robots were just considered as something we can never build or interact with. Currently robotics will develop in tandem with neural network and artificial intelligence. Companies like Google helping developers learn AI through Tensorflow and Watson from IBM is great step towards achieving this goal.

May be in next 20 years we would set out unmanned missions to various parts of the galaxy then it would be better have a completely autonomous robot that could chart and plot our courses. 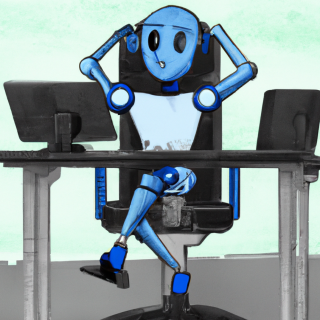